Enquiring Minds and the Importance of Influence

How the father of evolution came to be

Charles Darwin’s work has inspired biologists right up to the present day. And many have made important contributions to our developing understanding of Darwin’s theory of evolution. It is only through continued collaboration and influence from the scientific community that we can work together to discover many unknowable truths about ourselves, just as Darwin and his colleagues did in the nineteenth century.

Charles Darwin had plenty of false starts before becoming the father of evolution, as we know him today.  He first began studying medicine at the University of Edinburgh, but Darwin did not appreciate the gruesome methods of surgery that were standard during the nineteenth century. His main interests were in natural history and collecting specimens, a hobby he began as a child.

Darwin finally plucked up the courage to tell his father he hated surgery. He was sent to study divinity at the University of Cambridge. We all know, that of course, Darwin did not become a priest, but surprisingly it was here, at Christ’s College that Darwin’s interest in animals, plants and rocks grew. Surrounded by likeminded people, it was this unsuspecting setting that unknowingly planted the seeds for a new school of thought we take advantage of today.

It was John Henslow, a professor of Botany who taught Darwin how to look at nature with a scientist’s eye – this friendship would become the most important of Darwin’s life.

Darwin, of course had his own influences and it is only through expanding on the ideas of others can we truly begin exploring scientific methods.

Sir John Herschel was a famous mathematician and astronomer. Herschel argued that the most important aim of natural philosophy was to understand the laws of nature. He knew the best way to get this done involved a combination of inductive reasoning (using observations to draw conclusions) and deductive reasoning (gathering observations to support what is already believed). This concept would have a significant impression on how Darwin’s enquiries would progress.

Alexander von Humboldt was a Prussian explorer and scientist who also influenced Darwin through his scientific expedition and writings of Central and South America, which also helped popularise science. After reading Humboldt’s description of the Canary Islands in the Atlantic Ocean, Darwin decided he wanted to see the islands for himself.

Thus, began his tutelage to improve his genealogy skills and a wider understanding of the natural world.

On December 27, 1831 Darwin set sail on HMS Beagle with Captain Robert FitzRoy, a cartographer with the Royal Navy, at the suggestion of his friend Henslow.

An important Lesson of Vigilance

If your life goal is to circumvent and record as much of the natural world as possible, do not take a casual approach to a seemingly insignificant stop on your voyage. As Darwin would regretfully learn, his random collection of samples from the Galapagos islands would prove that it pays to be scrupulous.

Darwin did not bother to identify which island each of his small bird samples came from. Upon return to Britain and with the help of fellow experts, he began studying each specimen. It was ornithologist, John Gould who noted that what had originally been incorrectly categorised as two groups of blackbirds and finches was actually each a separate and unidentified species. This got Darwin thinking… 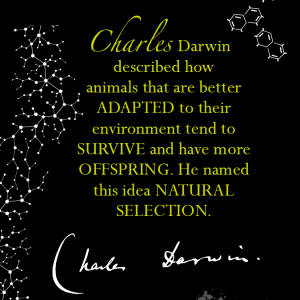 Expanding on a hero’s notion

Geologist, Charles Lyell had previously shown that the earth was much older than initially thought and many of Darwin’s collected fossils further proved that many plants and animals were now extinct, while others had clear similarities to those still living.

Darwin took Lyell’s expanded view of the earth’s age and began expanding his theory of species change occurring over a very long period of time.

Beginning with the Galapagos finches, he realised each specimen had a different beak, after noting John Gould’s findings. Darwin wondered if a single species had arrived on the archipelago long ago and overtime the beaks slowly changed to adapt to the food source of each particular island.

It was reading Thomas Malthus’s Essay on the Principle of Population and the suggestion that animals produce too much offspring that gave Darwin his “lightbulb” moment. He realised that an animal must have some advantage over other young animals to survive.

The Spirit of The Age

Darwin knew his theories of natural selection would cause an uproar among creationists, as it conflicted with the Bible’s account of creation. This was the predominant view in the era. Darwin knew he needed proof.

His eight years studying barnacles finally proved how natural selection worked in practice. Along with acquiring a deep hate for barnacles, he was finally ready to publish his findings.

In 1855, naturalist, Alfred Russel Wallace wrote to Darwin, describing is own theory of origins of species after traveling through South America, Indonesia, and Malaysia. It was so similar to Darwin’s own findings, they published their ideas together – on June 30, 1858, the Theory of Evolution was presented to society.

Today, scientists understand far more about the biological processes that create evolution, but there are still many unanswered questions. One of the most important is whether humans are still evolving – and if so, into what?

Discover more about Charles Darwin, his work and legacy in Charles Darwin. Part of the ‘Scientists Who Changed the World‘ Series by Anita Croy.