Infused with the warmth and vibrancy of Barbara’s beloved island, The Adriatic Kitchen is a must-have cookbook for those wanting to experience traditional food at its best.

Barbara Unković has always been drawn to the land of her father, the sun-soaked Croatian island of Korčula in the Adriatic Sea. She spent several years living there, in the seaside village of Račišće, immersed in its way of life, its culture, history and food. Now, inspired by the island’s culinary traditions and its abundance of fresh, seasonal ingredients, Barbara has produced The Adriatic Kitchen, a delightful, rustic cookbook full of gorgeous recipes and evocative memories. Over 70 simple yet delicious recipes are included, such as Croatian Sweet Easter Bread; Black Risotto; Fresh Fig Crumble; Roast Chicken with Pomegranate and Spinach; Dalmatian Shepherd’s Lamb with Potatoes and Broad Beans; Sugared Almonds; Croatian Pepper Biscuits; Carrot and Mint Salad. Infused with the warmth and vibrancy of Barbara’s beloved island, The Adriatic Kitchen is a must-have cookbook for those wanting to experience traditional food at its best.

Radio Live NZ, March 2017
Barbara was interviewed on Radio Live NZ, talking about her latest, The Adriatic Kitchen. Click here to tune in. 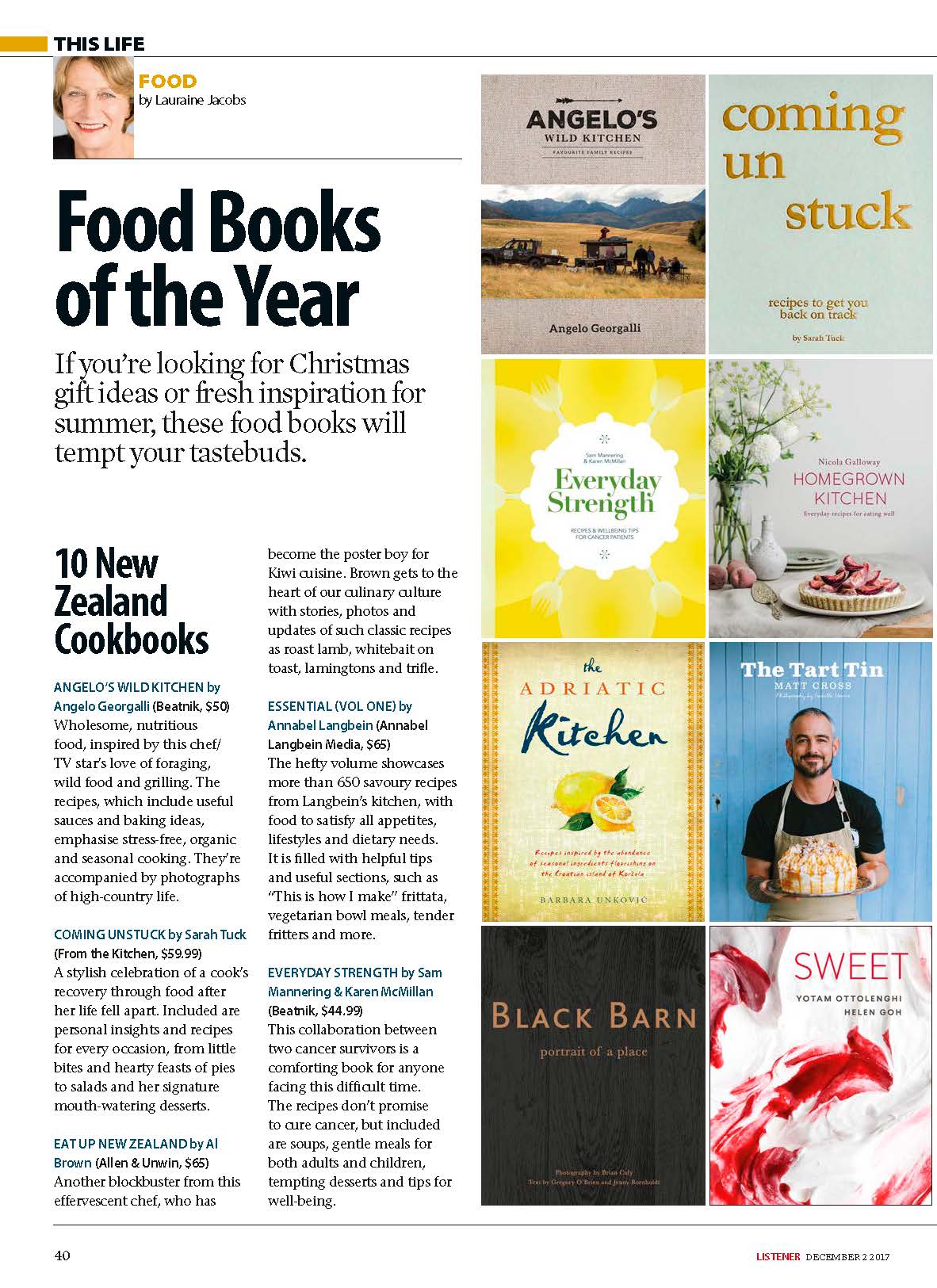 Bay of Plenty, June 2017
Barbara’s delicious Vanilla Horseshoe Biscuits and Slow-Roasted Tomatoes featured in Bay of Plenty this week. See the recipe below! 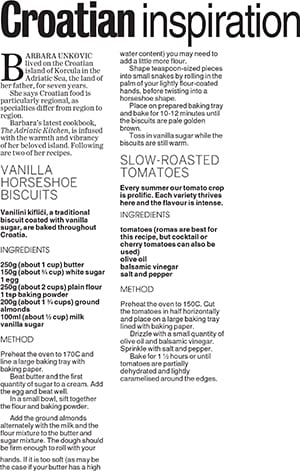 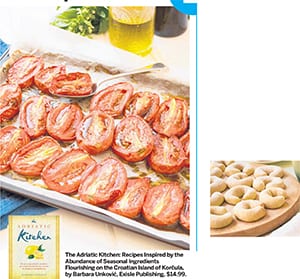 Northern Advocate, May 2017
“Infused with the warmth and vibrancy of Barbara’s beloved island, The Adriatic Kitchen is a must have-cookbook for those wanting to experience traditional food at its best.”

Beattie’s Cookbook Blog, May 2017
“Take a gastronomic journey to sun-drenched Croatia, with this rustic cookbook celebrating the best of slow cooking traditions.” – Click here to read in full.

The Advocate, February 2017
The Advocate has penned a fantastic article covering Barbara’s Career: from receiving honours in creative writing and receiving over 30 awards to writing The Adriatic Kitchen. 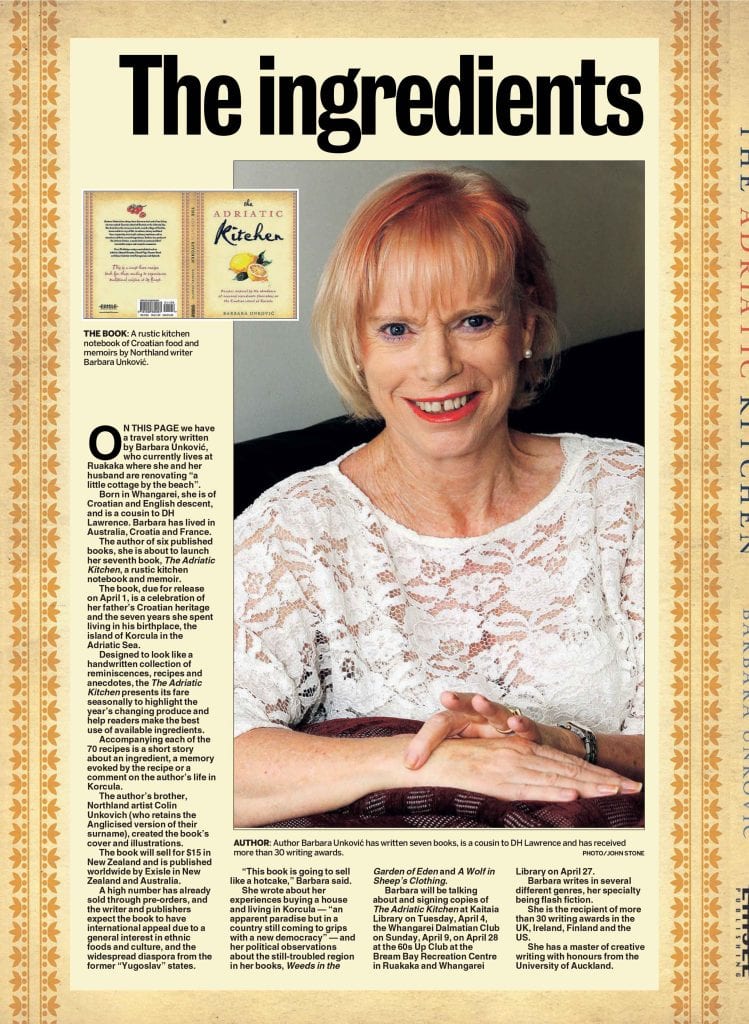 PrimoLife Magazine, July 2017
“A gem of a cookbook”

The Cove, May 2017
“a delightful rustic cookbook full of gorgeous recipes and evocative memories”  – Click here to read the full review.

Living Now, May 2017
“These tantalising treats from the sun-soaked island of Korčula will take your taste buds on a trip to the Adriatic Sea” –  Click here to view.

Free Thought – Australian/Ukrainian Newspaper, May 2017
“From the vivid tangerine blooms of pomegranate stems in spring, to grapes and olives ‘beginning to grow fat and ripen’ beneath the intense heat of the Adriatic summer sun, Barbara viscerally evokes her love of the place, and intoxication with a landscape and culture overflowing with the rich bounty of the soil and sea.” –  Click here to read in full.

Good Organic Gardening Magazine, May 2017
“Barbara Unković has penned a love letter to the food of her father’s homeland”

Easy Food Ireland, May 2017
“We love the recipes themselves; heavily influenced by Italian cuisine and understatedly vibrant they rely wholly on the quality of the ingredients.”

Hip Little One, April 2017
“Using a refreshing mix of seasonal ingredients, combined with pantry staples, and guided by easy step-by-step instructions Barbara helps her readers whip up traditional Croatian delights in their own kitchen. The book covers more than 70 delicious recipes, lovingly divided by the season they are generally made in so you can enjoy a taste of Croatia all year around.”

Food and Travel, April 2017
“They say you can’t judge a book by its cover, but in this case it simply is not true. The sunny colours of this slim book, The Adriatic Kitchen, immediately conjure up visions of cliffs and sun-soaked beaches, lemons and lamb and long lazy lunches on a grapevine shaded deck.”

Unity Books, April 2017
“Thank you Barbara for a cookbook that is easy for busy people to use and inspires cooking with fresh seasonal and local food. The Adriatic Kitchen won’t end up at the back of a cupboard or draw – my copy will take pride of place on my bench top, and will be used often. I highly recommend you get a copy for your bench top too” – Read the full review here.

In The Good Books, March 2017
“a great reference for any kitchen!”

Be the first to review “The Adriatic Kitchen (eBook)” Cancel reply