Did you know it was Pennsylvanian woman, Rachel Carson who alerted the world to the dangers of environmental poisoning from pesticides and other manmade farming chemicals through her accessible writing style?

Carson was a marine biologist. She also happened to be a writer and a poet. This would prove crucial to her history altering revelation.

An undergraduate at the Pennsylvania College for Women, she began as an English major, but soon switched to biology thanks to her inspirational biology teacher, Mary Scott Skinker. This was trailblazing in the 1920s, where English and biology were from two entirely different schools of thought!

Carson knew the aim of science was to discover and reveal truth, which was also the aim of forms of writing such as biography or history – so she believed that science writing was not a separate field of its own. This distinction is what made her books so accessible to the masses and why her work became so influential, changing the way we view the environmental world today.

While Carson had hopes to complete her studies in marine biology with a doctor of philosophy degree (PhD), the effects of the Great Depression were growing worse. In 1934, she was forced to drop out of her PhD due to a lack of money, and when her father died the next summer, Carson suddenly became the sole earner for her mother, older sister and nieces.

In 1935, she took the Federal Civil Service exams to become a junior wildlife biologist and junior aquatic biologist in the U.S. Bureau of Fisheries. The only problem was, there were no job openings.

Department head, Elmer Higgins had an intriguing assignment up his sleeve for Carson, however.  The Bureau was putting together a series of 25 radio shows on sea life, called Romance Under the Waters. He wanted to make marine biology interesting for the average listener, something Carson could get behind. Higgins knew of Carsons reputation as a writer, but had never read anything she had written. He took quite the chance in hiring Carson to write the scripts, but it proved the beginnings of a lifetime’s legacy.

First Steps as a Writer

Carson scripts were so good, she was asked to write an introduction for a government pamphlet. This was the beginnings of Carson’s essay, “World of Waters” which proved too good for a lowly pamphlet. Higgins suggested publishing this essay in the Atlantic Monthly. And thus, her career was starting to take shape.

In 1936 Carson was hired as a junior aquatic biologist, and in July of 1937 her essay was published in the Atlantic Monthly, under the new title, “Undersea”. Carson spent much of her career as a full-time employee of the U.S. Bureau of Fisheries. The Ocean, she believed, had a lot to teach us.

During her career, Carson wrote a triology of best-selling books on the sea. She wrote like a poet and wanted the every-man to be able to understand how dependent humans are on the ocean. Something seen in her highly succesful second book, The Sea Around Us.

Soon a new form of scientific literature was pioneered: A narrative account of the biological principles that control life on the seashore and the animals that live there, in her third sea triology title, The Edge of the Sea.

Turning to the land

After finishing her ocean triology, Carson turned to the land. She wanted to study the damage to nature being inflicted by new manmade pesticides such as DDT. This intital research took six years.

In 1962, a Silent Spring was born. A key book of the twentieth-century environmental movemnent. It highlighted a world without birds as the balance of nature was being destroyed by pesticides.

Carson soon became an icon for the growing feminist movement and was a massive influence in grassroots environmentalism. It wasn’t until 1963, that President John F. Kennedy’s Science Advisory Board Committee agreed with Carson and her book, noting that Silent Spring had a very important role in bringing the toxicity of pesticides to the public’s attention. Having spoken in front of this committee, Carson knew at this point, she was dying of breast cancer.

It wasn’t until 9 years later, in 1972 that the use of DDT in agriculture was banned in the United States. Rachel did not live to see DDT banned, but she had sown the seed.

As early as 1950, Carson was warning about the dangers of global warming, in The Sea Around Us. She describe what is now widely known to be true: that the oceans hold the key to the planet’s warming.

Not everyone agrees with the warnings that Carson and later environmentalists gave the world about climate change.

So what can one person do?

We can moderate our behaviour now, just as Carson suggested all those years ago. It is as easy as making small changes, from recycling your soda can to choosing to walk or cycle to school or work. Help clean up your local beaches or forest tracks. Look at the Earth as a precious resource, just as Rachel Carson did. It’s resources will not last forever and humankind has to learn to live within our means. 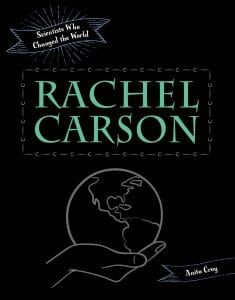 Discover more about Rachel Carson, her work and legacy for environmenal change in Rachel Carson. Part of the ‘Scientists Who Changed the World‘ Series by Anita Croy.