Getting to know your Anxiety Beast

GETTING TO KNOW
YOUR ANXIETY BEAST

Anxiety is not your fault. It is part of the range of experiences that come with being alive. Rather than making the anxiety louder and pouring suffering on top of the discomfort, you can build a better life with the range of emotions that make you human.

Rather than suffering, or feeling shame, or distress when experiencing anxiety, you can learn to refocus on acceptance and create a better life with your beast. Rather than remaining locked in a battle against it, you can learn to become a more compassionate coach to your anxiety beast so that you can move forward with what is truly important to you with less suffering, while training it to become a better-behaved inner companion along the way.

To understand your anxiety beast, it helps to ponder one question: Why are humans at the top of the food chain?

Physically, human beings don’t rank very highly among the list of toughest creatures on this planet. After all, we don’t have the physical capabilities and survival defences that so many other creatures have developed in order to thrive in an eat-or-be-eaten world. 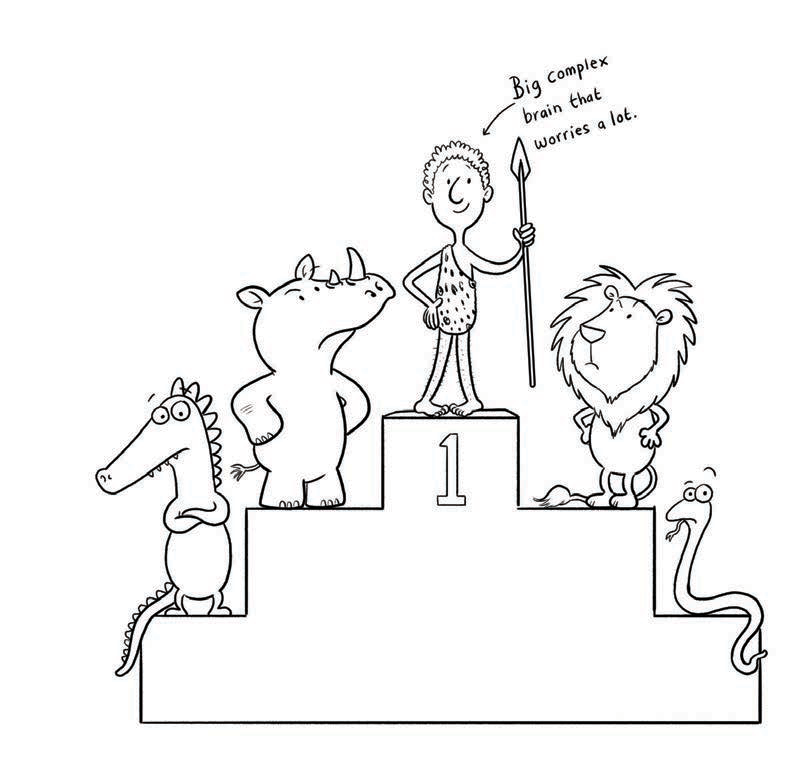 However, our modern, uniquely large and complex brains make us the absolute elite of all animals. We are the toughest predator that has ever existed on this planet, in large part because our big brains allow us (and allowed our distant ancestors) to feel anxiety and worry in complex and productive ways. This gives us massive survival and reproductive advantages.

So, the answer to the question of why humans are at the top of the food chain is that we have the biggest, baddest and most complex anxiety beasts on the planet! The most worried animal on Earth is us!

The origin of your anxiety beast: Why we are so anxious 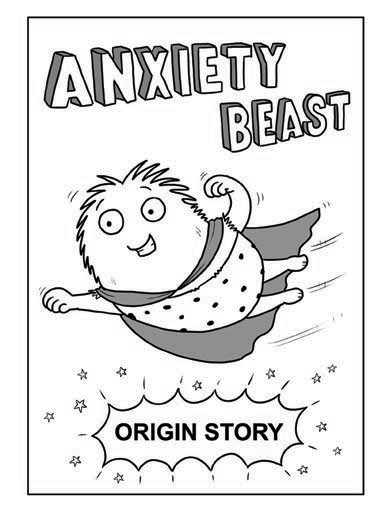 The origin story of the anxiety that you experience does not start with you. It began long in the past with your ancestors who lived hundreds of thousands of years ago. You just happen to be a member of a tribe of highly anxious creatures known as human beings. Over a very long period of time, your anxiety beast was forged and moulded into the powerful (and glitchy) inner bodyguard that it is now.

It is your specific biological factors, such as temperament and health, mixed together with the vast amounts of anxious learning that you acquired over a lifetime of experiences, that shape the personality of your anxiety beast.

The old nature versus nurture debate — Am I the way I am because of biology or my environment? — is long over. It is a draw. Both nature and nurture have woven a complex web of factors to determine who you are. This mixture of factors is what makes your anxiety beast so … beastly.

The ways in which humans experience anxiety and worry evolved over millions of years in order to help humans survive in very different and very dangerous times.

Over the millions of years that passed, our ancestor’s brains grew in size and complexity, which led to our ability to reason (and worry) better than any other animal. The human brain changed and adapted to an increasingly elaborate social order involving the use of language and better tools that were more adaptive for surviving in the intensely dangerous times of the prehistoric human.

Social situations came with a high degree of risk. If our ancestors were to stumble upon a neighbouring tribe while out hunting and gathering the severely limited resources of those times, it might have meant a fight to the death over those resources. Those ancestors with a healthy fear of strangers would have likely lived longer, safer lives (and spread their DNA to future generations).

Most of the things that anxiety beasts howl about today are reasonably safe. But in prehistoric times, some of the things we think of as safe today, signified danger back then. Being out in the darkness (with no phone or flashlight) would have been an opportunity for predators to have made a lone human a bedtime snack. Loud noises may have consisted of the bloodcurdling roar of an animal or fellow human’s screams of terror. Today’s irrational claustrophobia was yesterday’s realistic fear of being trapped and vulnerable to predators. The fear of being up high in an airplane today was yesterday’s fear of falling from great heights. The mostly irrational fear of snakes and spiders in the modern world was yesterday’s realistic daily threat. And so on.

As our ancestor’s brains slowly developed over time, they became better able to analyze in greater detail a range of threats, and to plan for what to do when a specific danger arose. And the world continued to change. Life for humans was still dangerous, but much less so. For most of us, most of the time, life was no longer such a daily struggle for survival.

But, no one told our anxiety beasts. Our anxiety beasts remained as vigilant as ever — always ready to jump into action to protect us. Only now the contexts had changed…

The human brain had grown more out of step with the times. For example, our brains continued to try to protect us from starvation by generating cravings for high fat and high sugar foods — which is vital to survival when food is scarce, but counter-productive in times of relative abundance.

Even though there are still atrocities and starvation around the world, overall we now (relative to the totality of human existence) find ourselves living in a golden age of comfort and security, but no one has told our anxiety beasts. They are still hard-wired to become afraid of situations that, though reasonably safe today, were very threatening in our not too distant past. This is due to our human genetic heritage and the life experiences that mould the various anxiety beasts we carry in us. 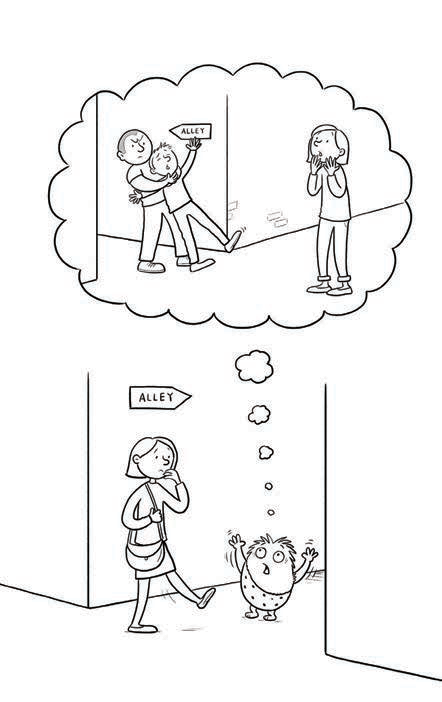 Anxiety beasts come in all different shapes and sizes. You did not get to design your own nervous system — you had no choice in the matter. You are not at fault if you have a more anxious temperament. It is not a sign of weakness or a bad omen in your life. However, if you hate your temperament and your anxiety beast, suffering increases.

In addition to your anxiety beast being shaped by nature, it is also moulded by your life experiences.

You are just one of an infinite number of potential ‘versions’ of the person you could have become.

So many factors outside of your control went into shaping the current version of who you are right now.

Life did, does, and will continue to teach your anxiety what to do to protect you from harm. You can learn to be afraid of literally anything.

This remarkable learning ability of anxiety is necessary! You need to have an anxiety beast that can learn to be afraid — it is vital for your survival, even today.

Having an anxiety beast is normal — now what?

It’s important to understand that feeling anxious is not your fault. You are a member of a very anxious species — in fact, the most worried species that we know of. Whether your fears are false alarms or a helpful warning that you are in actual danger, you are not alone in feeling anxious. Rather than looking at your anxiety as an inner demon trying to make you suffer, you can begin to see your anxiety, beastly as it may be at times, with more compassion and understand that it is trying to help you, even though it makes lots of errors. It means well.

By accepting the reality of who we are as a species (anxious survivors!) you turn down the added shame and emotional suffering that is caused by harsh self-criticism and struggling to get rid of uncomfortable emotions.

These are anxiety-provoking times–how can I help ease my (and others’) suffering?

Telling oneself not to be anxious during the COVID-19 pandemic is like trying to tell water not to be wet. These are anxious times.

View Dr. Goodman’s two part series for how you can better understand and manage your Anxiety during the COVID-19 Pandemic 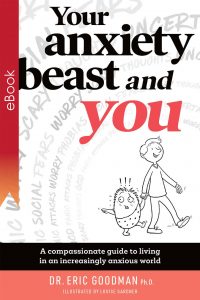 Your Anxiety Beast and You is available for eBook download now!

This is an edited extract from Your Anxiety Beast and You by Dr Eric Goodman, Ph.D and illustrated by Louise Gardner. Dr. Goodman is a clinical psychologist and anxiety disorders and OCD specialist. His private practice is in San Luis Obispo, California and he is a lecturer at California Polytechnic State University. He is the author of Your Anxiety Beast and You (Exisle) and Social Courage (Exisle). He lives in San Luis Obispo with his wife, three kids, dog, and their anxiety beasts.